Considering its only just February the weather is fine today. Sunny, dry, blue skies and very blustery. The campsite, Skegness Sands, is right on the coast and has its own gate onto the promenade.

Today we are walking into Skegness along the beach. It’s quiet with only a handful of other people, mostly dog walkers. We pass a rather unusual garden dedicated to Jesus. The offshore wind turbines are glistening in the sunshine and look a lot closer to land than yesterday. As T keeps saying, ‘Skegness is so bracing’, an ancient advertising slogan, and we are thankful for our hats and hoods to keep the wind out. Its a lovely walk along the water’s edge on golden sand. 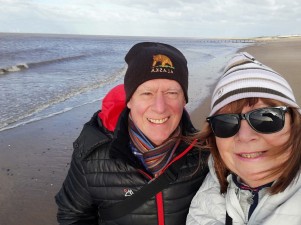 As we get closer to the pier it gets a little busier. It’s hard to imagine what it’d be like in the summer though. We wander along the to the end of the pier with a warming cuppa. The pier exit is through an arcade full of games that bring memories of holidays long past and rainy days.

We wander around the town to the Tower garden and its many ducks. It’s a typical old fashioned, down at heel seaside resort full of arcades, pubs restaurants and souvenir shops.

We consider going to the cinema but don’t fancy either of the two movies, so we go the pub instead. A bit of a crawl later including a visit to the rather nice art deco pub The Ship, a failed attempt to eat at a Chinese restaurant, a tasty Indian meal, a game of sticky bingo using playing cards in the Liberal Club and a pub more than ready for Valentines Day, we eventually take a taxi back to the campsite.