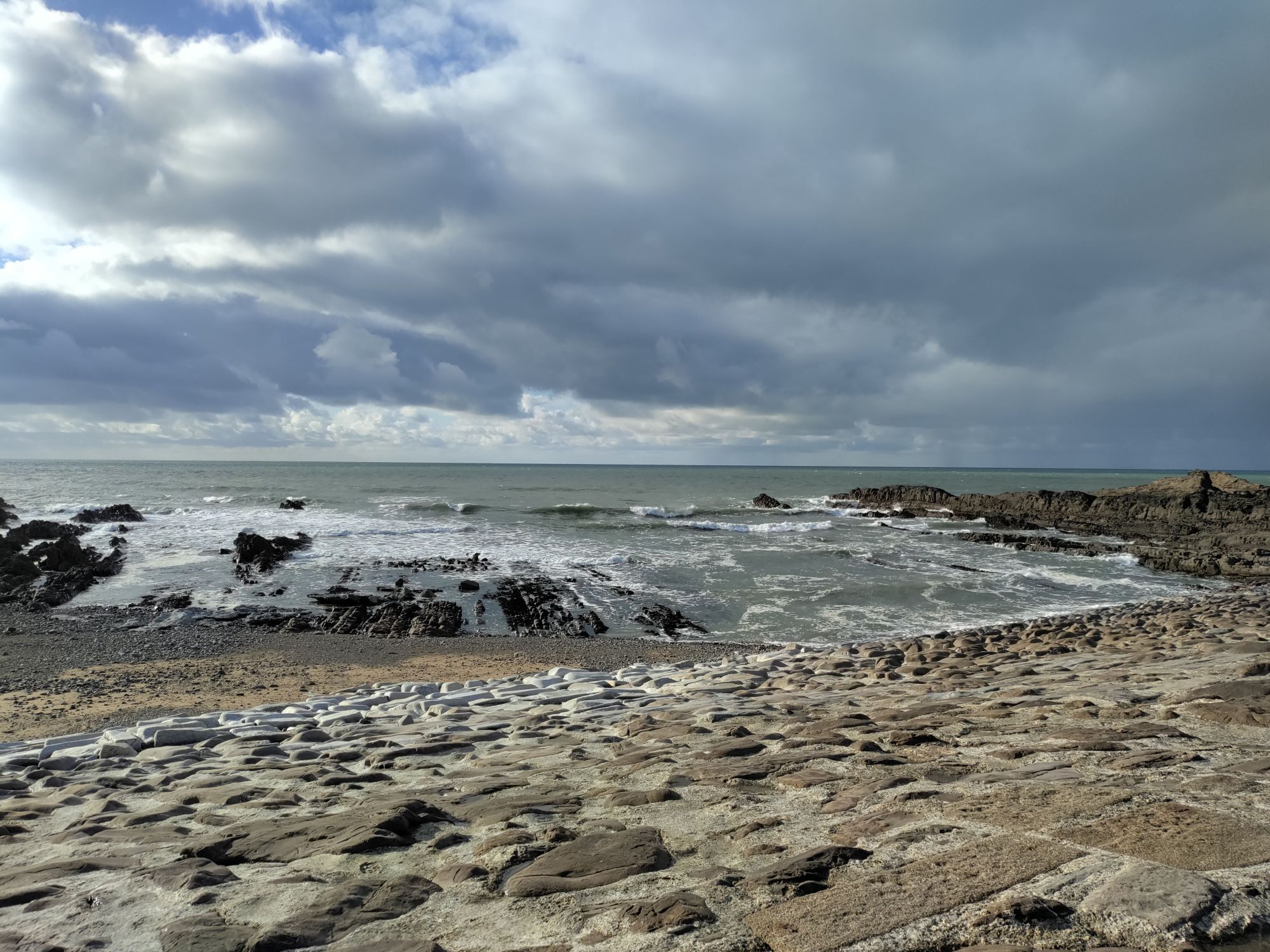 Today we are leaving Devon and taking the bus to Bude in Cornwall, literally just over the county border.

It’s a bus ride again, the 219 this time. There are only about 5 buses a day so we are getting the 12:25 out and the 17:25 back. First though we have a leisurely breakfast and take our time getting ready.

It’s only 40 minutes into Bude compared to the 55 to Bideford yesterday although the mileage is similar. Lots less stops and the route is mainly on the main A road rather than winding and narrow B roads. Feels like an express service in comparison.

Once we land we see signs for tourist information so follow them. Get ourselves a useful map even though we have to pay 40p for the privilege. Wander down the canal stopping off at lovely craft shops where we buy some unusual glass Christmas decs. The sun is shining and the sky is mostly blue so we are feeling thankful for the good weather.  We cross the canal at the sea lock, one of only two in the UK, obviously totally tide dependent.

I love the walk up to and across the breakwater. The wind is blowing and the sea is looking wild and it’s beautiful. We spend ages looking at a sole surfer hoping they manage to catch a wave and stand up, but it doesn’t happen.

Next we wander up the hill at the side of the breakwater to Compass Point and enjoy the magnificent views along the coastline..

The South compass point, out of the way of the prevailing winds from the Atlantic, is noticeably less worn than the rest

On the way down we enjoy a rainbow.

We wander back towards Bude Castle Heritage Center, diving in craft shops out of the driving rain which has blown in and admire some art in a free exhibition.

The cafe was closing so we find a cafe on the high street instead and share a very large tasty Cornish pasty and a scone.

We squeeze in a half in The Barrel At Bude, that’s sells Cornish everything and only opens Thursday to Sunday. A final half in The Globe Hotel just across from the bus stop which is nearly out of everything as it’s closing the next day!

Catch the last bus back to Hartland, with very strange lighting and then go to our Hartland local, The Kings Head for pizza and beer. Another good day. I really like the vibe at Bude, a stylish seaside town.